One of the popular variants of rummy is Gin Rummy, simply known as Gin. It is a two-player card game that originated from the 19th century game Whiskey Poker. The purpose of creating Gin Rummy was to have a rummy game that was faster than regular rummy.

In the U.S., Gin Rummy is the most popular variant with rummy lovers. Let’s understand the rules of the game and learn how to play rummy.

Gin Rummy is typically a two-player card game. In case of more than two players, one of the players becomes the dealer, who does not deal any cards to himself/herself. This role changes with each subsequent hand.

A standard 52- card deck is used in the game. However, if the deck of cards comes with printed Jokers, then they are kept aside as Gin Rummy is played without any Jokers.

Objective of the Game

In Gin Rummy, each player is dealt 10 cards. The objective of the game is to meld one’s hand into valid sets and runs.

A set is formed with 3 or 4 cards of the same rank. For example, 3 of Spades, 3 of Diamonds and 3 of Hearts together form a set. A set cannot have more than one card of a suite.

A run is formed by arranging 3 or more cards of the consecutive ranks but of the same suit. For example 3, 4, 5 and 6 of Clubs form a valid run.

Cards that are not part of any run or set in a player’s hand are known as deadwood.

The non-dealing player gets to pick the first card, from the discard pile. If the player refuses to use it, then it’s the turn of the dealer, who can use the card or refuse it.

Ending the game in Gin Rummy is known as knocking. A player may knock a game in two ways:

In free Gin Rummy online game, going gin gets you 25 points in addition to the deadwood points of your opponents.

In case of knock points, the player who knocks receives points equal to the difference between their and the opponent’s hand. For example, if a player knocks with 6 and his opponent has 10 deadwood points, then the knocking player’s score will be 4 points.

Gin Rummy retains the core essence of original rummy. However, certain features of the game indeed make it very challenging. That is what makes Gin Rummy the most popular card game after Indian Rummy. 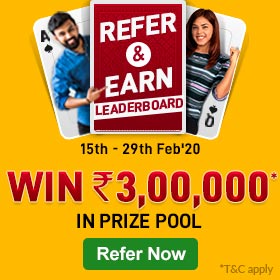 5 Differences Between Rummy and Gin Rummy
Rummy is a popular card game with many popular variants.…